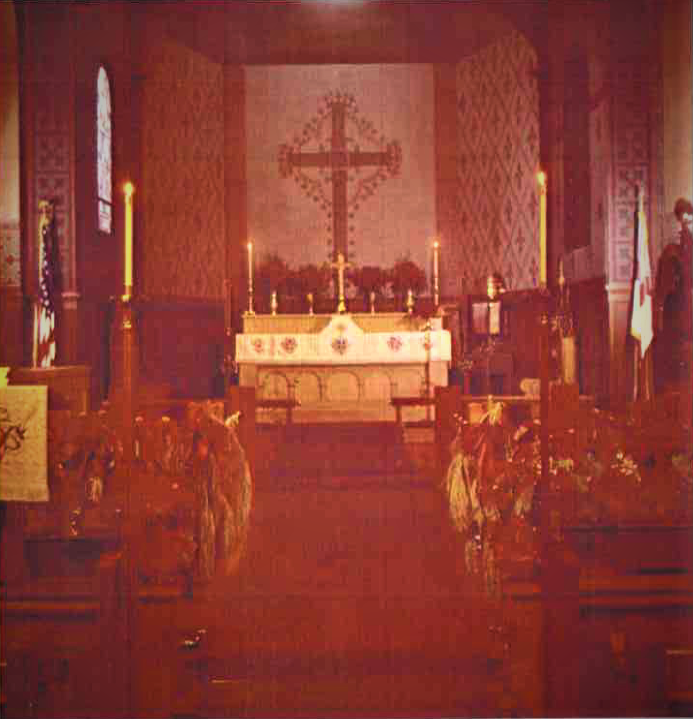 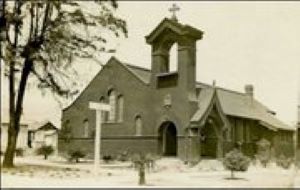 St. Mark’s Celebrated Its Centennial in 2010

An amber light slanted down from the second floor window, its beam occasionally broken by a passing carriage along Upland’s Second Avenue. It was a warm summer evening, and the few churchgoers who were gathered in that upper room reflected on the events of the day during which their small group drew up a petition seeking permission to form a new Episcopal parish.

Primarily, old-timers recall, the petitioners represented a group of members of Ontario’s Christ Church (Episcopal), who yearned for a more sedate (“low” church) approach to worship rather than the more ceremonious services conducted at the “higher” church in Ontario.

That upper room meeting was held August, 29, 1909, in a second story hall of the Commercial National Bank building that stood at the southeast comer of Ninth Street and Second Avenue. The city’s population was barely 3,000. Its commercial section, crisscrossed by dusty streets, was surrounded by hundreds of citrus groves.

Less than five months following the historic meeting in the bank building, the Los Angeles Episcopal Diocese approved the petition and the new parish was formed. The first vestry met on April 25, 1910, for the purpose of, among other things, naming the new church. Parish historians have noted that the founders were so moved by the collect of the day that they decided to name their new church “St. Mark’s.”

This is the collect: “0, Almighty God, who hast instructed the Holy Church with the heavenly doctrine of thy evangelist St. Mark: Give us grace that, being not like children carried away by every blast of vain doctrine, we may be established in the truth of thy holy Gospel.”

Seventy-five people were registered as members.

St. Mark’s opened the doors of its small brown, wooden structure on June 11, 1911 at the northeast comer of Euclid Avenue and F Street. There it stood for the next 54 years. The church cost between $4,000 and $5,000, which was covered by pledges of 59 parishioners. In later years, a separate parish hall and a rectory were added to the property.

One member of the original vestry was G. A. Hanson, father of a young daughter, Edith. She, as Mrs. Edith Mason, remained a faithful communicant until her death in 1971. Edith is believed to be the last survivor directly tied to the church’s 1910 membership.

The brand new St. Mark’s was a small structure but incredibly beautiful. Its interior was exquisite with its handsome cushioned pews, privately commissioned stained glass windows, and thick wine-colored carpet, all of which were dominated by an elegant recessed and subtly ornate altar. Behind the altar was a mural depicting the altar in hews of gold and pale blue.

As one long-time parishioner once said, “Going into that little church every week was something like putting on a pair of warm slippers on a cold winter morning.”

The church served its parishioners through two world wars, the Great Depression and the transition of the community from its agrarian purpose to a sprawling suburban complex. The citrus groves were gone, and the soon-to-be-called Inland Empire was muscling toward becoming a thumping economic engine.

Parishioners decided, with some sadness, that it was time to move so the church could be expanded. The buildings and property were sold, and in 1965 the people of St. Mark’s traveled north to their new home on 16th Street east of Euclid Avenue where a lemon grove had recently stood. There the congregation applied some of its own muscle over the next several years.

A pre-school was established in 1962, it consists of four classrooms and a walled play area. The preschool is open to children aged 2 to pre kinder. Classes have a curriculum that covers math, language arts, cooking, art, music and foreign languages.

An elementary school was founded in 1982 complete with classroom buildings, a library, bell tower and amphitheater. Its academic standard was coveted by private schools throughout Southern California. Sadly, the school closed its doors in June of 2020.

St. Mark’s is now regarded as one of the most dynamic parishes in the Los Angeles Diocese.

As for the little church on F Street, it was abandoned and sat empty, stripped of its artifacts. Then one dark night it was rolled from its foundation onto the street and hauled up Euclid Avenue by house movers. The trip was made among the glare of flood lights and police cars on the way to its final resting place on 18th Street west of Euclid where it would become a community cultural center.

Some old-time St. Mark’s people were pleased they were spared the sight of that forlorn exodus. The building, now 100 years old, still sits there on 18th Street on public property where it has been variously used as a cultural center, museum, polling place, venue for weddings and other events. The roof was destroyed by fire several years ago, but the building was saved.

Shelby Forrest, a 55-year member of St. Mark’s, is its unofficial resident poet. To help measure the depth of the church’s rich history, Shelby was asked recently why he loves the parish so much. He paused a moment then borrowed words of another rhyme-maker from a different time, and simply said, “Let me count the ways…”